All charts start with the ruling king or queen and display all living heirs in direct descending line. If you wish to see more extending ancestry lineage chart, you may like to e.g. go to my British royal family tree page.

For now let’s begin with the royal family trees starting with the ladies first – the Queens. So we’re proceeding with a chart illustrating British royal genealogy.

The English royal ancestry chart is 23 cm x 19,14 cm in 220 dpi making it fit into an A4 piece of paper perfectly if you need to print it out.

The British family tree is fairly modern in the sense that there are lots of ex wives and husbands and bonus kids making the tree fairly complex compared to many of the other royal trees of Europe.

The firstborn and current heir to the throne is Charles, Prince of Wales, second is Anne, Princess Royal, third is Prince Andrew, Duke of York and finally we have Prince Edward, Earl of Wessex.

In 2005 Prince Charles remarries with Camilla Parker Bowles who now is Camilla, Duchess of Cornwall.

Peter Phillips marries Autumn Kelly in 2008 and together they have Savannah Phillips and Isla Phillips.

Zara Phillips marries Mike Tindall in 2011 and have a daughter, Mia Grace Tindall, and in 2018 they have a second daughter Lena Elizabeth Tindall.

The fourth child of Queen Elizabeth is Prince Edward. He marries Sophie Rhys-Jones in 1999 and breaking all tradition his siblings have built up, he is still married to her. Sophie Rhys-Jones becomes Sophie, Countess of Wessex.

Together they have Lady Louise Windsor in 2003 and James, Viscount Severn in 2007.

Royal Tree of the Kingdom of Denmark with Queen Margrethe II 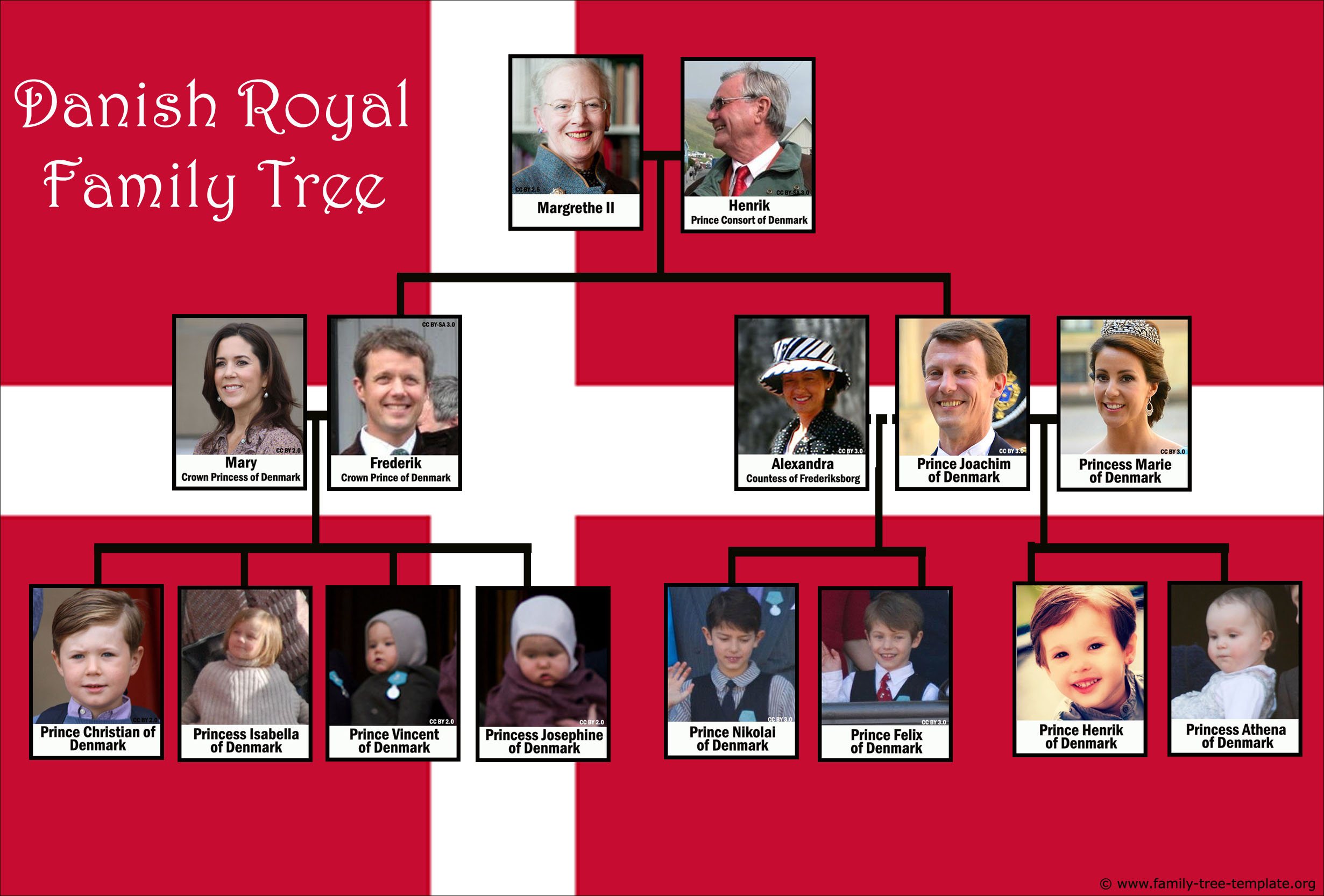 The marriage doesn’t last and they divorce again in 2005. Alexandra remarries Martin Jørgensen in 2007 but divorces him in 2015.

There being no more ruling queens in Europe, let’s proceed with the Kings. 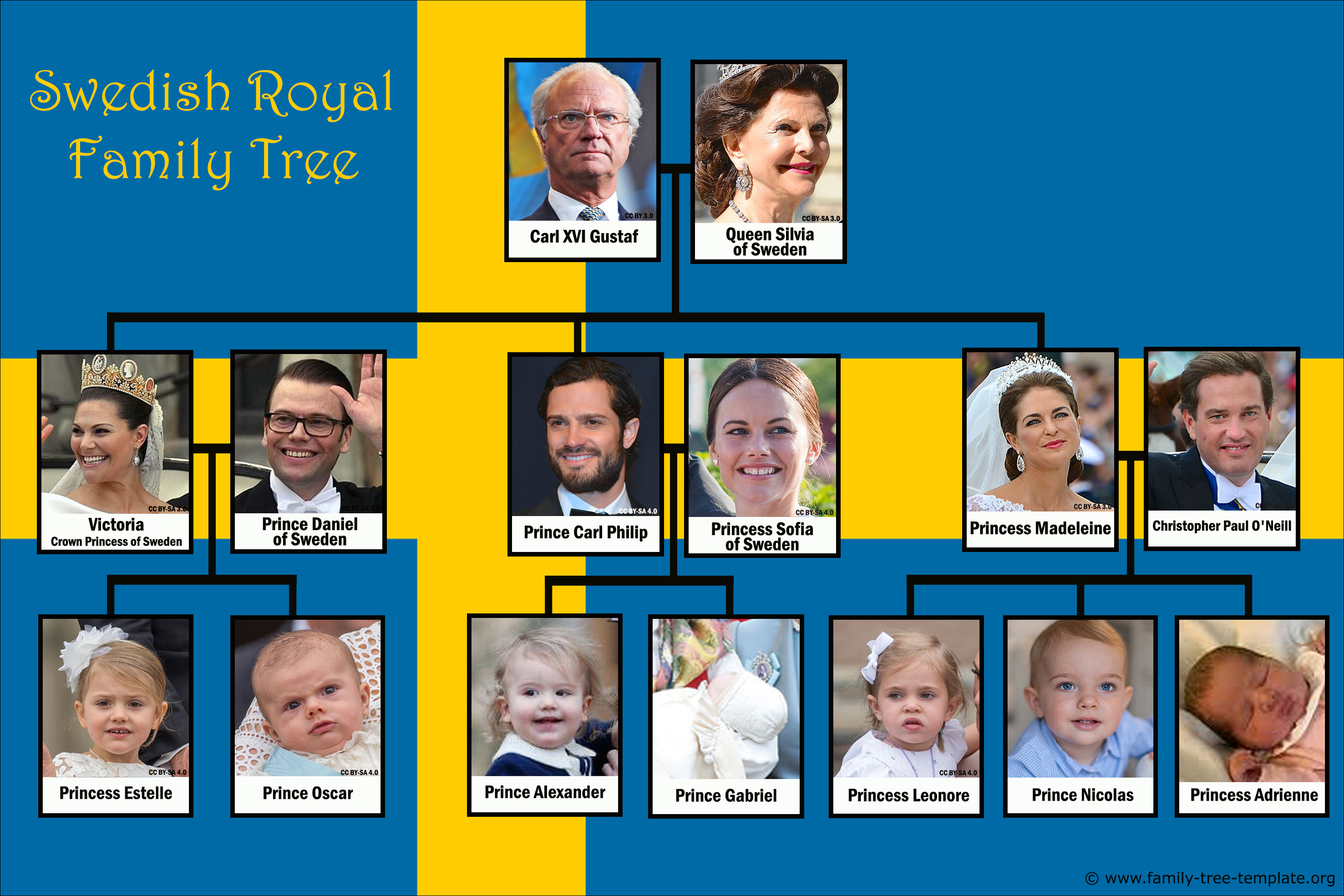 Swedens King is King Carl XVI Gustav who in 1976 took Silvia Sommerlath to be his wife and queen. She is now Queen Silvia of Sweden.

Crown Princess Victoria marries Olof Daniel Westling in 2010 making him Prince Daniel, Duke of Västergötland. Together they have second in line to the throne Princess Estelle, Duchess of Östergötland in 2012, and in 2016 they have a son Prince Oscar, Duke of Skåne.

Prince Carl Philip marries Sofia Hellqvist in 2015 making her Princess Sofia of Sweden, Duchess of Värmland. Together they have Prince Alexander, Duke of Södermanland born 2016 and Prince Gabriel, Duke of Dalarna, born 2017.

Princess Madeleine marries Christopher O’Neill in 2013 and together they have Princess Leonore, Duchess of Gotland in 2014, Prince Nicolas of Sweden, Duke of Ångermanland in 2015, and Princess Adrienne, Duchess of Blekinge in 2018. 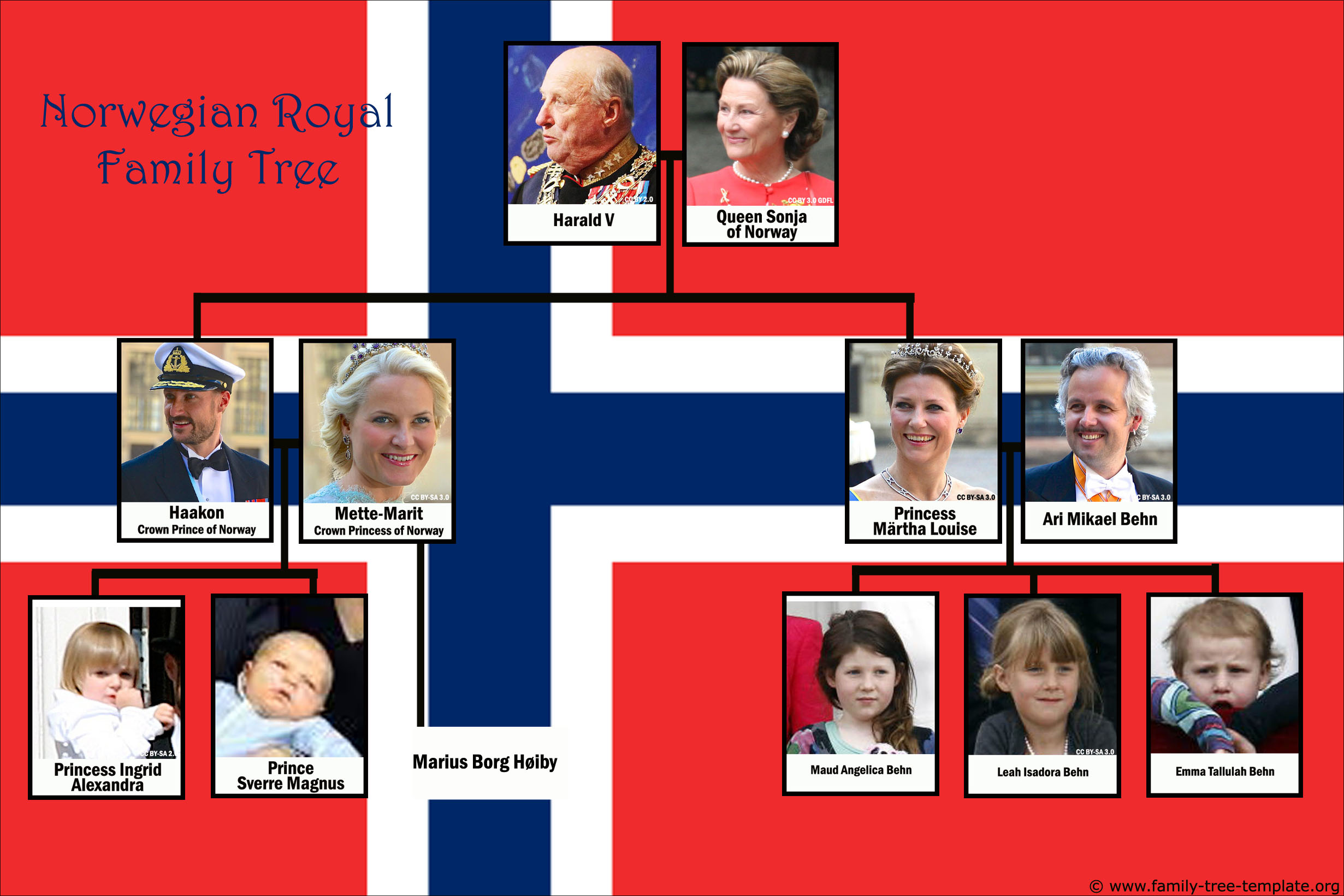 Norway is ruled by King Harald V. In 1968 he marries Sonja Haraldsen thereby making her queen of Norway.

In 2002 Princess Märtha Louise marries Ari Mikael Behn with whom she has the children Maud Angelica Behn in 2003, Leah Isadora Behn in 2005 and Emma Tallulah Behn from 2008.

Royal Dutch Family Tree with King Willem-Alexander of the Netherlands 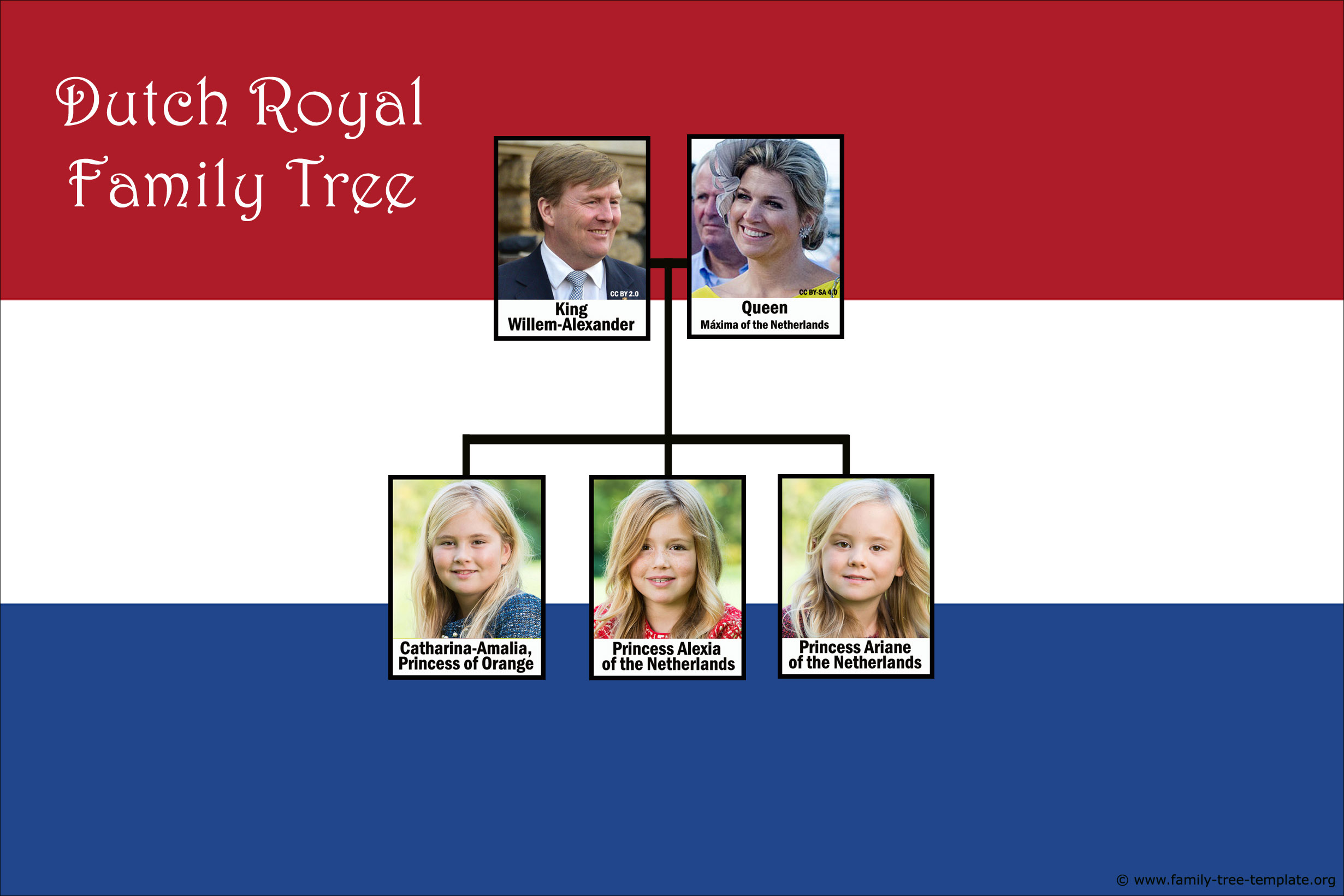 King Willem-Alexander was crowned king not long ago in 2013. He married Máxima Zorreguieta Cerruti in 2002 turning her into Queen Máxima of the Netherlands.

Also crowned in 2013 King Philippe is quite new the throne.

In 1999 he marries Mathilde d’Udekem d’Acoz which makes her Queen Mathilde of Belgium. 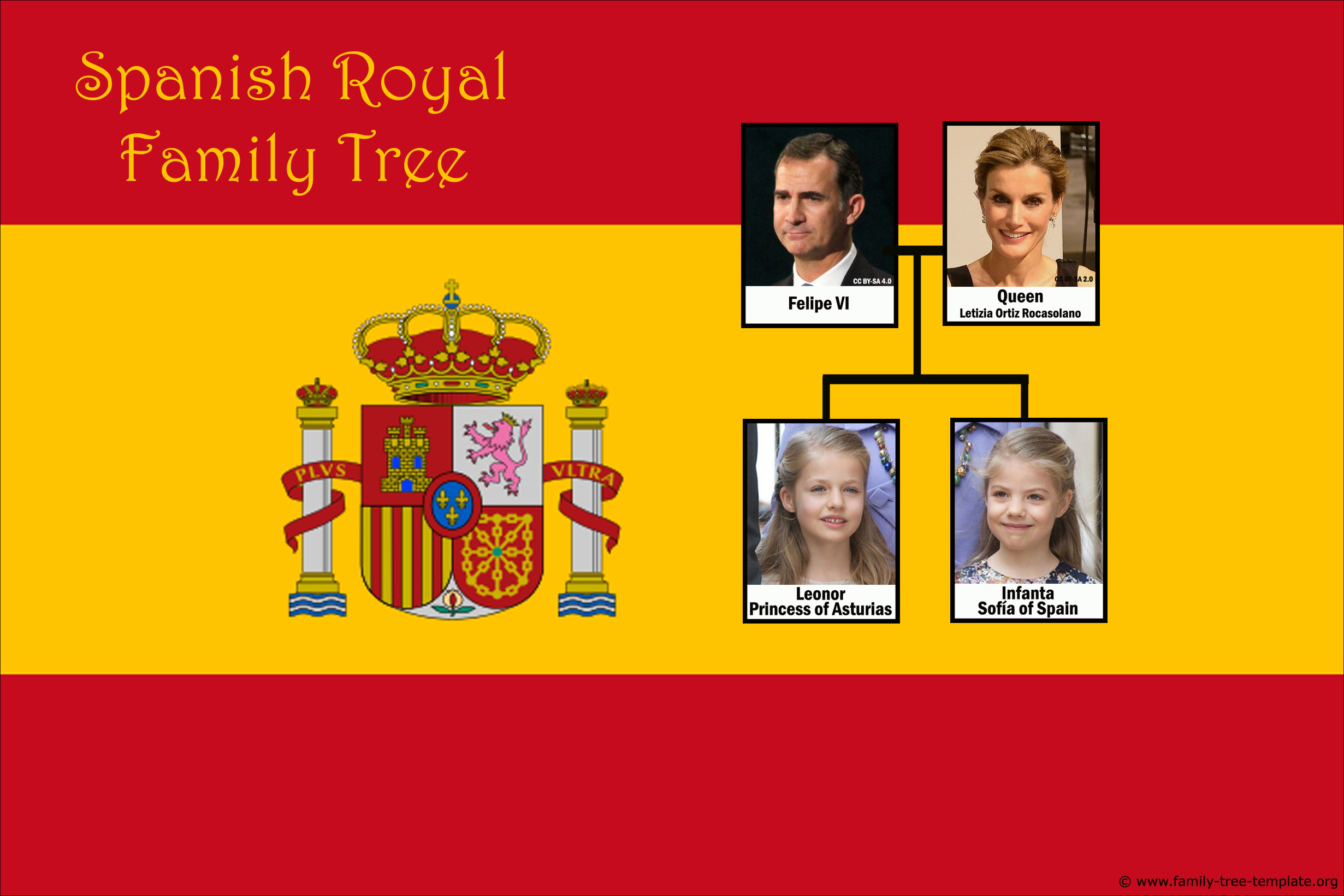 Like King Philippe of Belgium and King Willem-Alexander of the Netherlands, King Felipe VI of Spain is new on the thrown being crowned in 2014 (the other two both in 2013).

Together they have Leonor, Princess of Asturias in 2005 and Infanta Sofía of Spain in 2007.