A Greek god family tree is a great aid when you want to learn about the internal relationships between the Greek gods.

In this article I will present you with three family trees of Greek gods featuring each of the three orders of Greek gods: the Primordial deities, the Titans and the Olympians.

If you are searching for family trees that show all the Greek gods in one go – meaning both Primordial deities, Titans and Olympians in the same tree, you can find them here.

All family trees on this website are high resolution, free and printable.

The 3 Orders of Greek Gods

The Greek gods and myths were used in everyday religion in ancient Greece. The gods, among other things, embodied explanations of the creation of the universe and gave meaning to natural phenomena.

Within Greek mythology you’ll find there are three primary orders of gods that came into existence in the following chronological sequence: First arose the Primordial deities, then the Titans and finally the Olympians.

Even though they are all related, family life was far from peaceful. Everybody, particularly the males, wanted to be in power and rule the universe. In the end this resulted in a great 10 year war between Titans and Olympians called Titanomachy. or plain language just the Titan War. The war ended badly for the Titans who were the ones in power when the war began. With Zeus as the ruler, the Olympians could leave the battle field as the winners.

Family Tree of the Primordial Gods 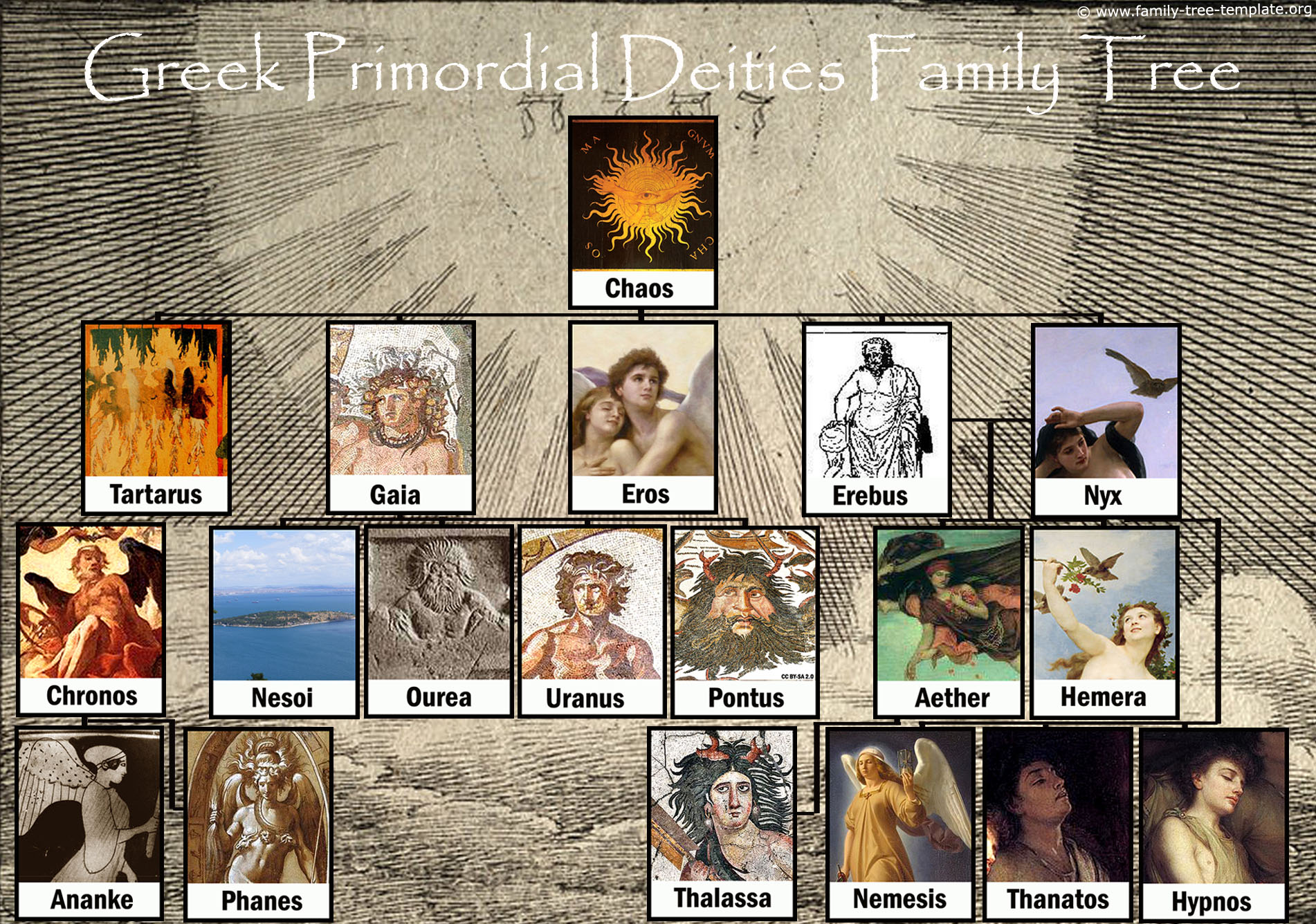 The Greek god family tree featuring the Primordial deities in Greek mythology is 23 cm x 16,16 cm in 210 dpi – meaning it will fit well onto an A4 piece of paper and is thus all ready to print.

The Primordial gods were the first gods that came into existence. They are not gods quite in the same way as the Titans and Olympians. The primordial deities are more embodiments of the building stones of the universe like night and sky, sky and earth, air, light etc.

The Primordial gods were said to be born from Chaos, which is perceived as a nothingness or void.

Another deity you are most likely familiar with is Eros (god of procreation).

The other deities feature: 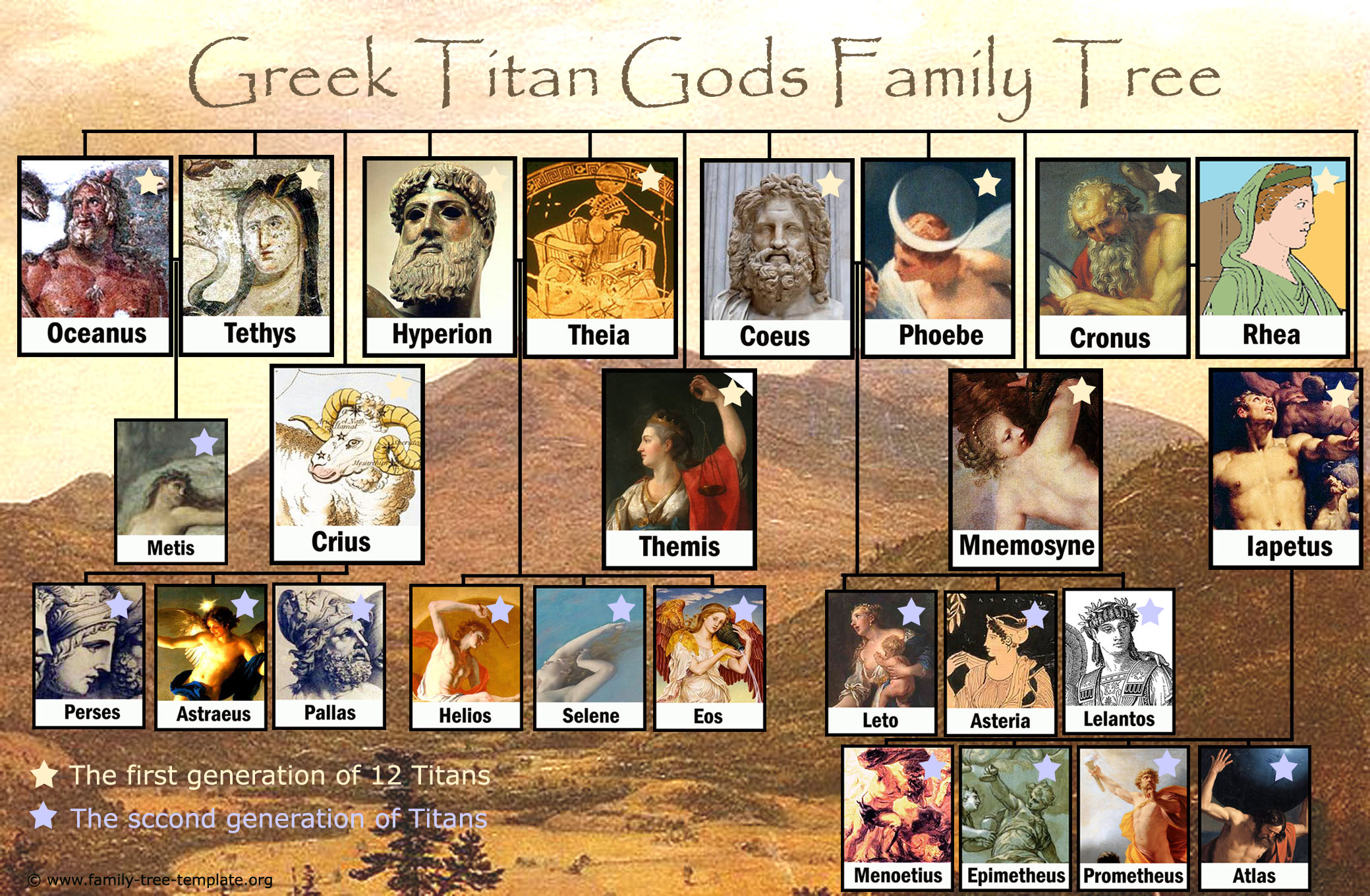 The mighty Titans were the rulers of the universe before they were overthrown by the even stronger Olympians.

There exists two generations of Titans. The first generation are the parents of the second generation.

The first generation of 12 Titans are: 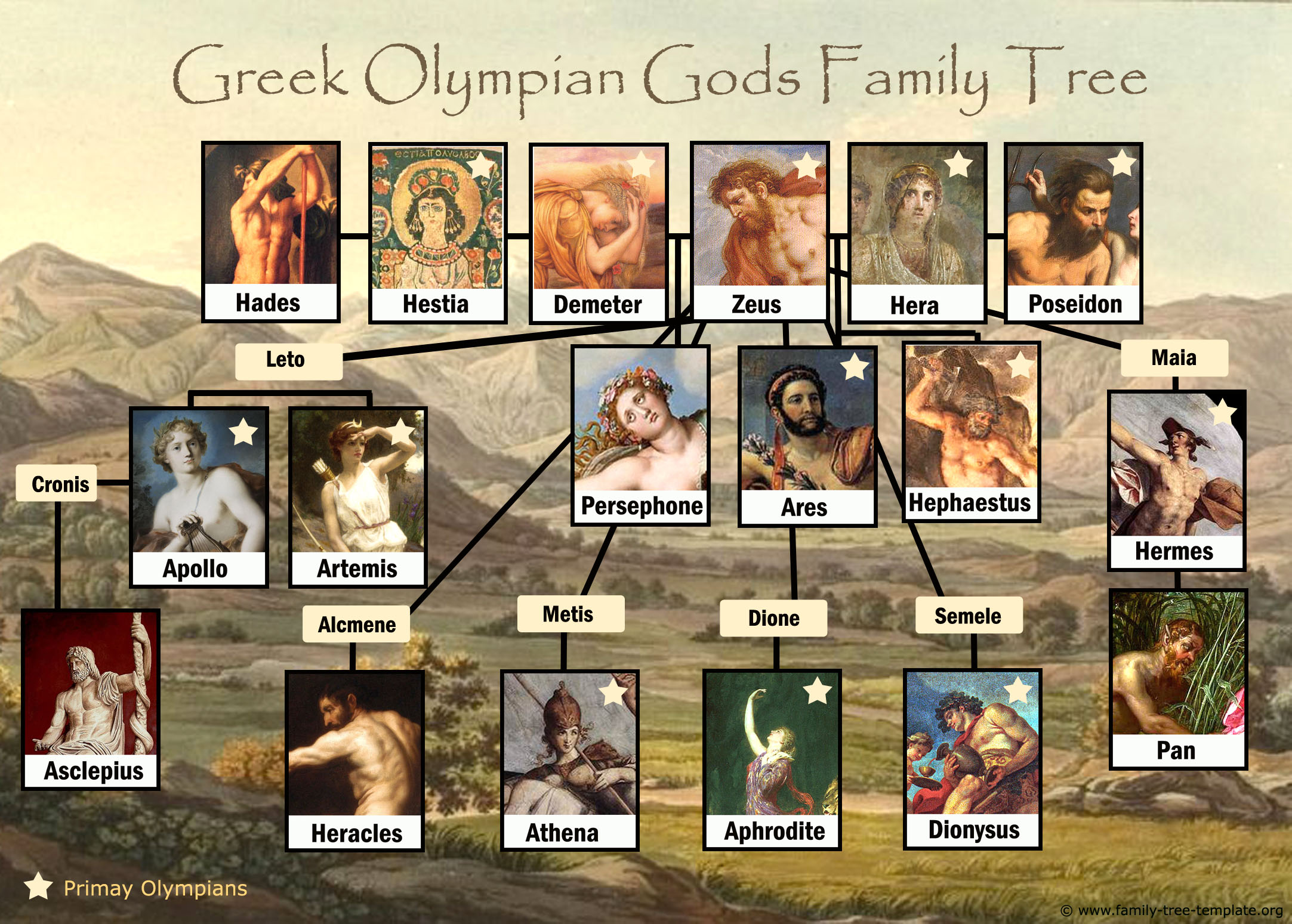 Residing on Mount Olympus, the Olympians were believed to lead human life in all aspects. After the victory in the Titan War they became the rulers of the universe.

There were said to be 12 Olympians: Zeus, Hera, Demeter, Poseidon, Apollo, Artemis, Athena, Aphrodite, Hephaestus, Hermes and probably Hestia. Some Olympians are always includes as members of the 12 while others are not. Thus there is a bit disagreement regarding membership.

The attributes of the 12 Olympians are: