Confused about how the Greek gods are related to each other? A Greek mythology family tree will help you understand their very complex family relations. Your will find two of such complete Greek gods family trees further down on this page.

The Complexity of the Greek Gods’ Family Relations… Is Everybody Having Children with Everybody?

Well, both things are true! How about that!

The Greek gods (just like the Egyptian gods and pharoes) didn’t mind having children with their own offspring as well as their own sister or brother. You could say that they were very open minded that way. Also I guess it’s a way of keeping the god and goddess blood running in family without the risk of human dilution.

Particularly the fertile ruler of the Olympian gods (Zeus) didn’t waist any time and had many, many children.

Zeus had children with his aunts (Mnemosyme and Themis), his cousins (Metis and Leto), his sisters (Hera and Demeter) and his own daughter (Persephone). Also he had many mistresses who also provided him with a forest of offspring.

If you want a family tree particularly centered around Zeus, you might like this page where you’ll find two Zeus family trees.

The Greek Mythology Family Tree with all Relevant Gods 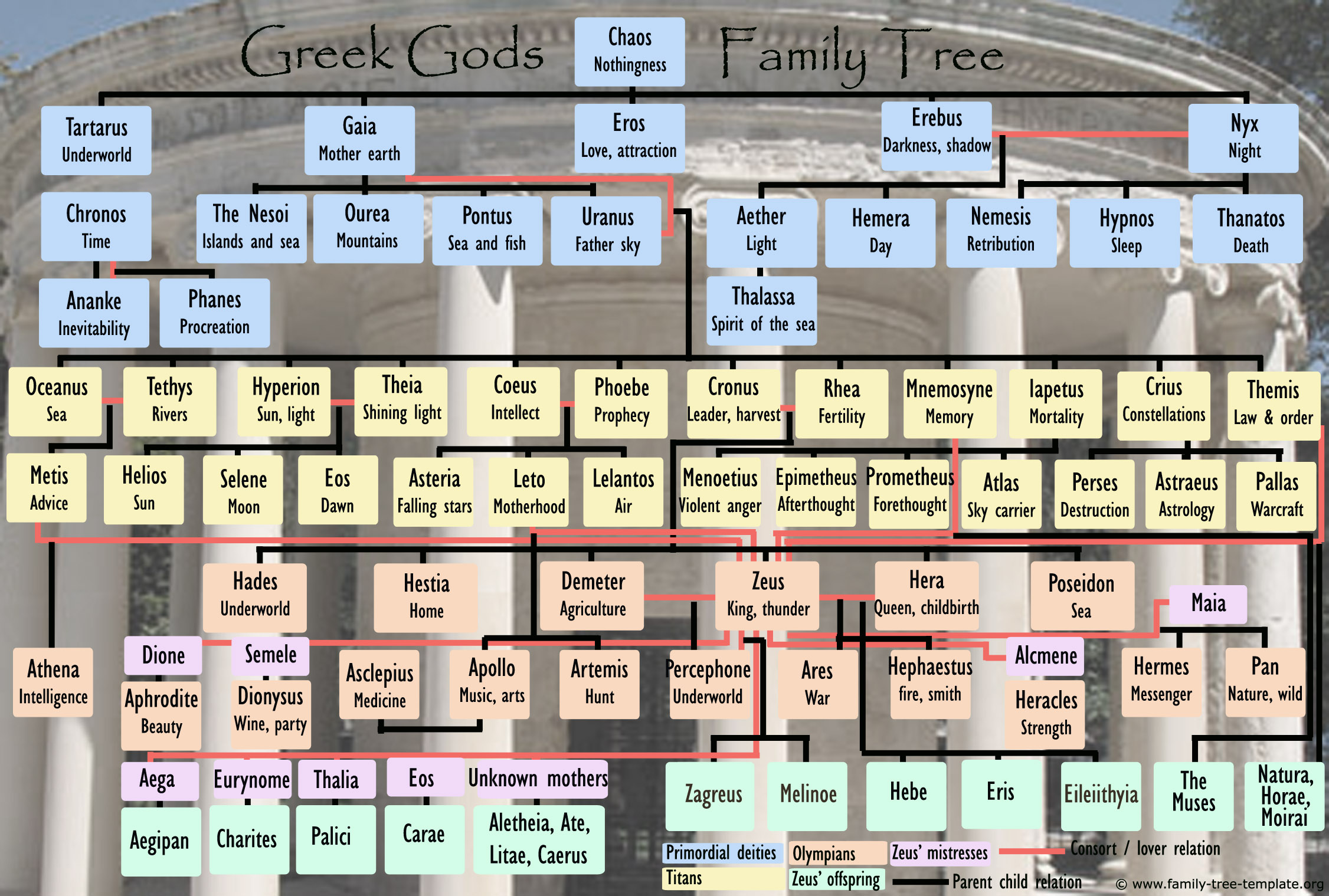 This family tree of the Greek gods is ideal to print. Just save the image on your computer and print it. It already has the right size for an A4 piece of paper. The image is 26 cm x 17,54 cm in 220 dpi (which is fairly high resolution – meaning good print quality).

In the family tree above, I’ve tried to squeeze as many gods in as I possibly could. Below each name, you’ll find their primary attribute. All Greek gods were gods of something, you see (just like e.g. the Egyptian gods or Nordic gods).

The Primordial deities are said to stem from Chaos, a void, a nothingness. Most famous of the primordial deities are probably the parents of the Titans: Gaia and Uranus. Other primordials are Tartarus, Eros, Erebus, Aether, Nyx, Chronos, Ananke, Hemera, Phanes, Pontus, Thalassa, (Hypnos, Thanatos, Nemesis, Nesoi, Ouera).

In the middle of the tree in yellow, you will find the Titans, the second order of gods. Among the Titans, you will find both a first and a second generation. The first generation consist of 12 Titans (6 males and 6 females) that are all the offspring of the primordial deities, Uranus and Gaia. The females, the Titanesses, are Rhea, Phoebe, Mnemosyne, Theia, Tethys and Themis. The males are Cronus, Hyperion, Oceanus, Coeus, Crius, and Iapetus.

Further down the tree you will find the Olympians. The Olympian Gods are probably the ones you know the best and have heard about the most. At least that was the case with me. The Olympians are the reddish boxes in the illustration.

As there were 12 Titans, there are also 12 Olympians. Oh, you may say, but in the illustration, there are more red boxes than just 12. Yes, and you’re right.

Sources agree that there are 12 Olympian gods, however, they are not in complete agreement as to who they are. Thus I’ve plotted ind all possible candidates. (This is the difficult thing about making a Greek mythology family tree: the sources don’t always agree, so you have make a decision as to who you follow.) The 12 Olympians that most agree on are: Zeus, Hera, Demeter, Aphrodite, Poseidon, Athena, Apollo, Artemis, Ares, Hephaestus, Hermes and Hestia.

Other Olympians are: Dionysus, Hades, Persephone and Pan.

In purple you’ll find some of Zeus’ countless of mistresses that weren’t considered either Primordial, Titans or Olympian. Some weren’t even gods.

At the bottom of the family tree in green , you’ll find some of Zeus’ offspring that like the ‘purple’ mistresses were not part of the Primordial, Titan or Olympian order of gods.

A Greek Gods Family Tree with Images of the Gods 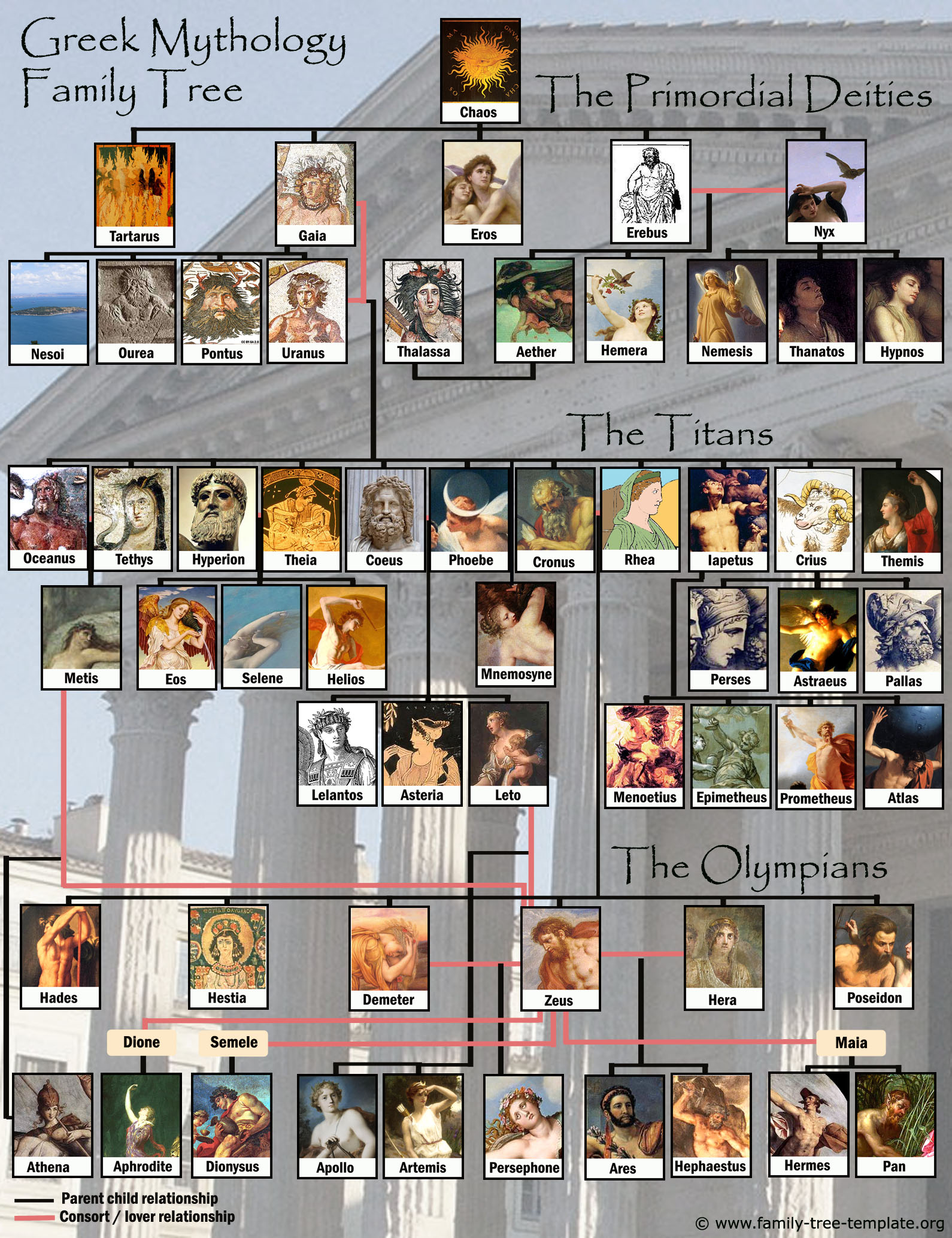 This family tree image is also designed to be printable and you’ll find the dimensions ideal for this: 25 cm x 19,23 cm in 210 dpi.

The family tree above is a little bit less detailed than the first one on this page, however, personally I find it a little more fun as I put in pictures from paintings of the gods.

However, as some of the gods are more know than others it sometimes proved very difficult to find an illustration of some of them. And sometimes sources didn’t agree on who it was on the picture, so please bear over with me if you don’t agree with who a particular illustration features.

Just like in the first family tree, I’ve divided the illustration into three sections, the Primordial at the top, Titans in the middle and Olympians at the bottom. In this tree I’ve only put in members of the three god orders. Nothing else.

I hope you enjoyed reading this page as much as I enjoyed making it. Making the family trees required quite a bit of research but as I love diving into new subjects and learning new stuff, this was a true joy. And plus, now I’m that wiser. And so are you! 🙂

Read about all the Greek gods and see a Greek God Family Tree in Three Varieties: Primordial Deities, Titans and Olympians